At the end of the 1970s, Fourier transform infrared spectroscopy (FTIR) replaced dispersive spectrometers as the predominant measuring method in infrared spectroscopy. The faster measurements, the higher signal-to-noise ratio and the better wavenumber accuracy enabled measurements of complete IR spectra with a high time resolution also of peptide and protein structures and their dynamics.

With the rapid development in the field of quantum cascade lasers (QCL) in the last decade, a new, very intense and tunable radiation source for the mid-infrared is now available, which will replace FTIR spectroscopy in many applications and enable new concepts. The idea of a semiconductor laser based on intersubband transitions in the conduction band was published already in 1971 by R. F. Kazarinov and R. A. Suris. Since the first QCL was realised in 1994, intensive research has been carried out to enable stable operation at room temperature in the mid to far infrared range. The last significant improvement of the QCLs was their wave number stability, so that QCL-based spectrometers can now achieve better results than FTIR systems. Due to their high brilliance, QCLs allow the measurement of significantly thicker sample layers and the use of less sensitive detectors. Whereas liquid nitrogen was previously required for cooling the ultra-sensitive detectors, this can now be dispensed with in many areas, making their use much easier, e.g. in clinical environments.

In contrast to conventional semiconductor lasers like the diode laser, the radiation of the QCL is not based on recombination of electrons from the conduction band and holes from the valence band, but on transitions of electrons within sub-bands of the conduction band. The laser is constructed from a large number of nanometer-thick semiconductor heterostructures, which enable transitions between subbands in quantum wells. The precise layer thickness control of single crystalline, nanometer-thick semiconductor structures is made possible by the molecular beam epitaxy method. 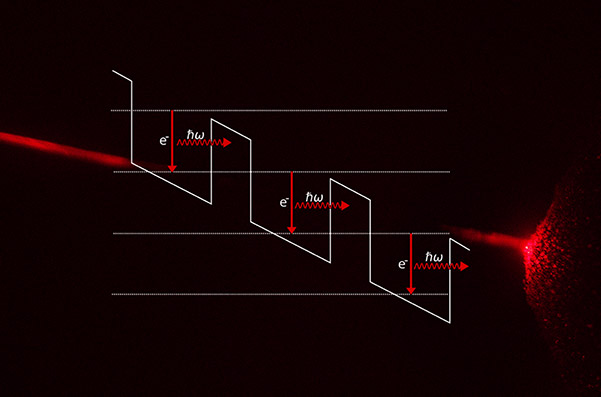 Figure 1: Intersubband transitions in the conduction band of a quantum cascade laser 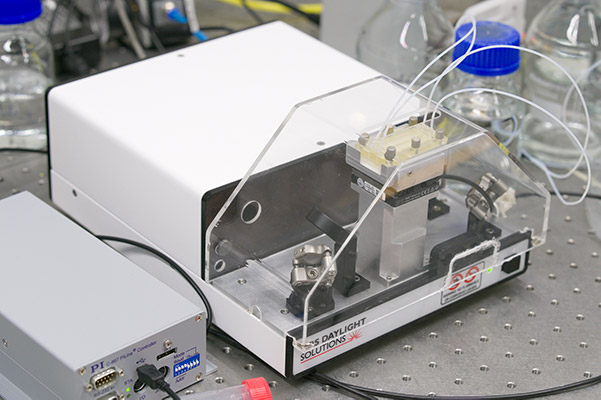 Due to the considerably higher radiation intensity, the much smaller dimensions and the lower demands on the laboratory equipment, completely new possibilities for the use of infrared spectroscopy arise, especially for the use in hospitals. For example, the use in IR imaging allows a significantly smaller instrument, which also does not require liquid nitrogen, but measures 160 times faster than a comparable FTIR system. This allows tissue diagnostics in minutes instead of days (Kuepper et al Scientific Reports 2018).

In addition to IR imaging with QCL microscopes, infrared spectroscopic measurements are also carried out using the ATR technique (attenuated total reflection). This involves the analysis of secondary structure distributions of proteins whose misfolding is associated with diseases, thus opening up new diagnostic possibilities. Using this technology, ProDi has already developed an immuno-infrared sensor for the diagnosis of Alzheimer’s disease. The measurements are based on IR differential spectroscopy with ATR technology. With the new possibilities of the QCL we hope to minimise the previously very unwieldy measurement setup and thus accelerate the translation of the sensor into the clinical routine.

Our own Key Publications